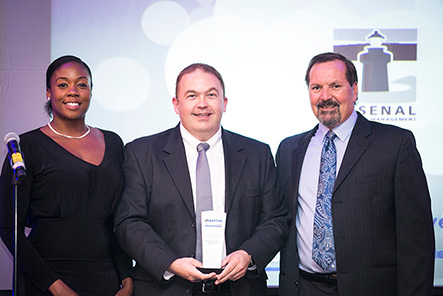 The judges made the award with these comments about Arsenal:

Arsenal impressed the judges with its pro-active and innovative approach, not just to day-to-day captive management but its interaction and involvement with the broader captive industry. The growing firm demonstrated its ability to think outside the box with its ‘reclamation bonds’ and ‘pre-need funeral coverage’ products. Arsenal showed an openness to work with multiple regulatory bodies to introduce these lines and has been heavily involved in new captive legislation in a number of US states, most notably Alabama.

“The US Captive Services Awards are the gold standard in the captive industry. We are thrilled to be nationally recognized as Independent Captive Manager of the Year,“ said Arsenal co-founder Norman Chandler.

The Independent Captive Manager of the Year category contains self-managed captives and captive managers that are not owned by a larger broking or insurance company. Judges look for the highest standards of customer care and satisfaction, excellent reporting processes and access to the team, innovative ways of managing clients risk and insurance structures. The judging panel also reviews evidence of business growth and key staff playing an active role in industry discussions and setting the agenda for the broader industry.

The US Captive Services Awards, now in their fifth year, recognize and reward those providers of captive insurance products and services who have outperformed their competitors and demonstrated the highest levels of excellence over the past 12 months. The judging process is rigorous and thorough to ensure that all the entries receive full consideration and that the true winners are chosen.

The US Captive Awards ceremony will be held on Monday August 8 at the Hilton Burlington, Vermont.

Founded in 2006, Arsenal is nationally recognized as a leader in the captive industry. In 2016 Arsenal was named Independent Captive Manager of the Year in the US Captive Service Awards organized by Captive Review magazine, in addition to nominations in 2014 and 2015. Arsenal delivers broad customer solutions in risk management for captives, mutuals, RRGs, and other insurance entities through office locations in Alabama, Georgia, Florida, Tennessee, and Texas.